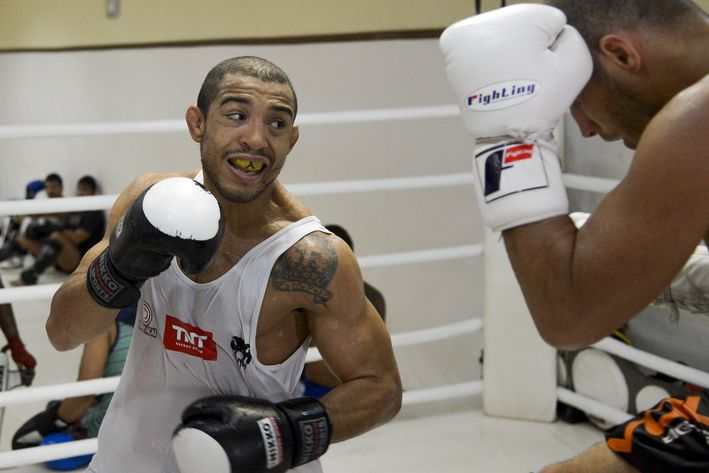 News broke on Wednesday that the Nova Uniao star has broken his rib during a sparring session in Rio de Janeiro for his July 11 bout with Conor McGregor in Las Vegas. Devastated with the injury, "Scarface" still plans on fighting "The Notorious."

"He cried. He wants this fight bad, everybody invested a lot in this," Nova Uniao head coach Andre Pederneiras told Combate. "I was with him the whole afternoon. He’s heartbroken. He wants to fight anyway. Now we have to wait for the exam results. Aldo is in deep pain."

Sources close to the situation told MMA Fighting that Aldo fractured his rib while training with 5-0 lightweight Alcides Nunes, and Pederneiras won’t make the decision to take Aldo from the card before talking with his doctors on Thursday morning.

"If the fracture is really confirmed, Aldo will have to stop training, do nothing for three or four weeks until it’s fixed, and then he would be able to do any exercise without forcing his rib," the coach said. "And then he would need a normal time to do a training camp: three months. I believe this fight wouldn’t happen before October."

LINK to full story: ‘Heartbroken’ Jose Aldo likely out until October if not cleared to fight at UFC 189 - MMA Fighting

Unfortunately there's no known cure for a broken heart...

Conor is ushering in the Chomochiq fashion era.

I'd prefer a healthy Aldo so he won''t have fanboi parades on both sides with ????

Can vagina cancel my 150 dollar bet on Aldo?

it works wonders. wouldn't the bets be off, if he's not fighting?

i never bet that far ahead

If it's the common pulled intercostal injury, it will take more than 4 weeks to heal. Also means he was wrestling hard (which of course, he should be).

Cracked rib in training is much less common but we'll have to wait for test results.

A shit son, should have waited a bit before placing that, but they probably pulled you in with the odds
You must log in or register to reply here.
Share:
Reddit WhatsApp Email Link
Top Bottom