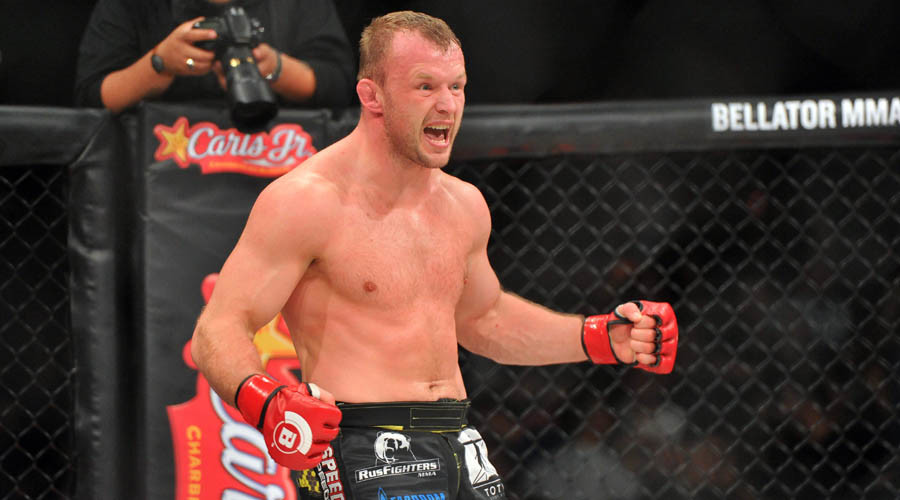 Following Bellator’s announcement about signing UFC’s number four ranked middleweight Gegard Mousasi on a six-fight deal, the company announced his first fight in the promotion will be against Russian Alexander Shlemenko.

Both Shlemenko and Mousasi head into the fight on a five-win streak, with the Russian claiming three of them by way of a finish, and with four knockouts for the Dutchman. When RT Sport first talked with the 33-year-old Shlemenko after the news of Bellator’s signing of the Dreamcatcher, he was somewhat tight-lipped.

However, speaking to the Russian again following the announcement of the fight against Mousasi, we learned this initial reluctance to open up was because he had been in talks with Bellator.

RT: You first said you would accept this fight only if it was for the championship belt, but then we learned that right in Mousasi’s first Bellator bout he'll face you. What changed?

Alexander Shlemenko: Originally Bellator offered me a different date, September 23, which didn’t work for me because as I said earlier, I&apos;m currently focused on training my student, Andrey Koreshkov, who will come back to Bellator at the end of August, and I'll corner him in this fight. Plus I'd want to fight Mousasi in a five-round fight. But the October 20 offer worked for me so we agreed on it. Although I’ll have to cancel some plans to be fully prepared for the fight.

RT: Considering that you’ll be in the States closer to the beginning of September with Koreshkov, will you stay all the way until your own fight on October 20?

AS: No, I’ll go back home to Omsk, Russia and train in the Storm gym, and then go to America about two weeks prior to the fight. So I’ll have to go back and forth. But I think there will be enough time to acclimatize.

RT: Considering your current overall ratings, with Mousasi being in the top five and you getting closer to the top 10, does it give you additional motivation coming to this fight?

AS: Of course, this is the only way for me to move up, I have to fight stronger opponents. Bellator told me some time ago that they have some surprise fight offer for me this fall. So when they signed Mousasi, I realized right away that that was they fight they were talking about.

RT: What do you see as your advantage in this fight? And what advantage does your opponent have?

AS: I’ll rely on my striking game as I always do. If we talk about my opponent, he’s taller than me, has better reach. He’s also heavier than me, as he cuts much more weight than I do. But it won’t be the first time I fight a bigger opponent. That was the case most of my career. I don’t like to cut a lot of weight. He is a well-rounded fighter, he can go for a knockout, but also has good ground skills, and can go for a submission.

Robbie Hart said:
That's not an easy fight from the one or two I've seen with the other guy
Click to expand...

Schlemenko is a killer..Watched my team mate dominate him for the first 4 minutes and a half on the ground.. then he hit my boy with a flying one to the ribs and that's all she wrote.. was actually one the last EliteXC card they ever had

Man on the silver mountain

This is going to be a wicked fight!! Bellator throwing him into the thick of things right off - wonderful!!!!!

Cagesidelore said:
This is going to be a wicked fight!! Bellator throwing him into the thick of things right off - wonderful!!!!!
Click to expand...

Yes they are..when Lombard chose to wrestle fk him that was a big indicator..or the way he decapitated manhoeff was brutal

Gegard will take him down and sub him in the first.

willthiswork said:
Gegard will take him down and sub him in the first.
Click to expand...

That's the smart thing to do!

POINT TO THE EASY WORK