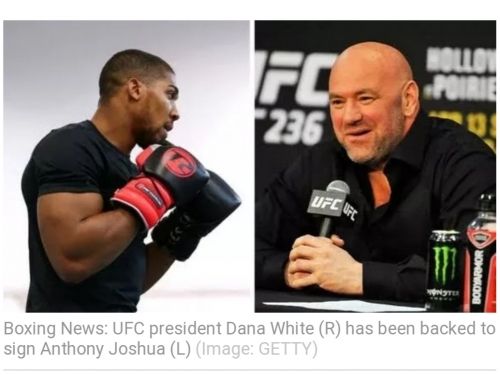 UFC president Dana White is more than capable of luring Anthony Joshua away from Matchroom Boxing and signing him to his own promotion, it has been claimed.

In the lead-up to Conor McGregor's multi-million-pound boxing match with Floyd Mayweather in August 2017, the UFC chief revealed his intention to enter the boxing world.

The 49-year-old has yet to make any signings to his Zuffa Boxing stable but has promised to make big moves in the sport after the summer.

Last May, it was reported White was keen on offering Anthony Joshua a whopping £350million deal to cut ties with his current promoters, Matchroom Boxing, and join his stable.

That notion was quickly dismissed by the veteran promoter, who believes he has the potential to turn to Joshua into a global superstar.

“I would like that,” White recently told CNN when asked if Joshua will be hearing from him in the near future. Right now, Anthony Joshua should be a huge star in the United States too. But he’s not.”

White's chances of luring Joshua - WBA (Super), WBO, IBF and IBO heavyweight champion - away from the clutches of his long-time promoter Eddie Hearn have been written off by many, with many calling it a pipe dream.

Veteran UFC announcer Bruce Buffer disagrees with that notion and believes White is more than capable of pulling off such a coup, citing the massive success he's had turning mixed martial arts into a mainstream sport as a testament to that fact.

"Money talks and people walk," Buffer told Express Sport. "A lot of money cuts a lot of family ties, as they say. And Dana is a maverick businessman.