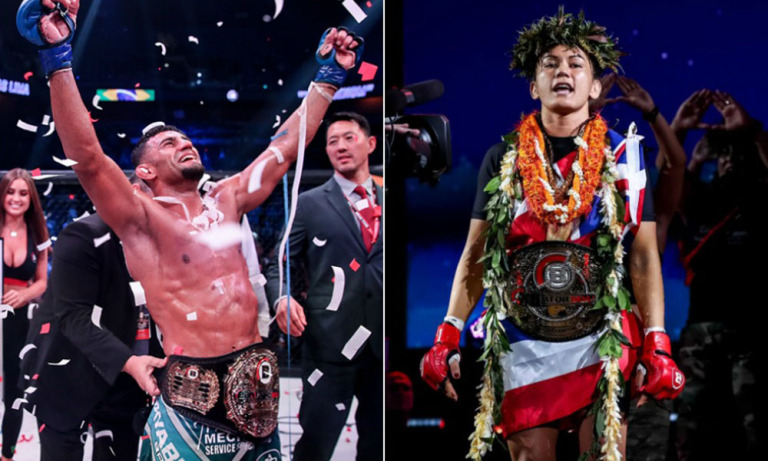 The two fighters have signed multi-year, multi-fight contract extensions with Bellator, the promotion announced Monday. Neither fighter currently has an upcoming fight on the books.

“Both Douglas Lima and Ilima-Lei Macfarlane continue to prove they are two of the most dominant fighters on the Bellator roster,” Bellator president Scott Coker said in a statement. “They made their Bellator debuts very early on in their careers, have climbed to the top of their respective divisions and have come to represent what this promotion is all about. As champions, both have taken on all challenges and have succeeded in every opportunity. I look forward to watching them continue their careers with us.”

As for Macfarlane (11-0 MMA, 10-0 BMMA), the Hawaiian continued her career-long unbeaten streak in December. At Bellator 236, Macfarlane thrilled the hometown crowd in Honolulu when she defeated Kate Jackson by unanimous decision. The victory marked the fourth time Macfarlane has defended her strap since winning it in November 2017.

Hopefully they are getting paid very well!

That sponsorship money must be ridiculous, I'm amazed anyone even bothers signing to the UFC.

I'm happy for them but sad that we won't get some of the potential matchups that they have elsewhere.

Willthiswork said:
I'm happy for them but sad that we won't get some of the potential matchups that they have elsewhere.
Click to expand...

I’m happy that yoU Fight Cheap can’t lure them away with empty promises.

Willthiswork said:
I'm happy for them but sad that we won't get some of the potential matchups that they have elsewhere.
Click to expand...


This one looks pretty dang good, certainly better than Usman.


This one looks pretty dang good, certainly better than Usman.
Click to expand...

I like it. I'd actually rather see Usman, Colby, Jorge, etc but Lima isn't small and he's skilled enough to hang with Moose. Just hope that fighting up the weight class doesn't prove to be the real difference.


Nemkov is going to mess around and ruin Bader if he's not careful.