BJ Penn: Gonna get back to the top, gonna get the belt back

How about just beating one opponent? His seven-fight winless streak is the longest in UFC history.

Vanzant got a jesus fish tattoo by her titty?

Fuck it, I believe him yo. I am aboard this train for as long as it's rolling down the tracks.

And it's threads like this that shows the true nature of mma "fans." Sad.

explain more so that any points raised can be answered in full. this sneering will not go unchecked.

Hang them up BJ you have nothing left to prove.

At this stage he shouldn't be allowed fight any more.
1

My interpretation of this is that he's unwilling to accept how he handled his training for the last 10 years.
More power to him if he can do it but maybe it's time for him to branch out and do something....anything else to find/keep/establish/confirm his focus and purpose.

Please tell me how this is sad
He sounds punch drunk now
I appreciate his mark on the sport but he needs to wrap it up.
There is no way he makes a title run
It’s time to walk away

Leader of The Syrup Boyz

JonesBonedMyMouf said:
It has been so long I can't remember who was BJ's last win
Click to expand...

I think it was his wife

CTE is real ladies and gentlemen... 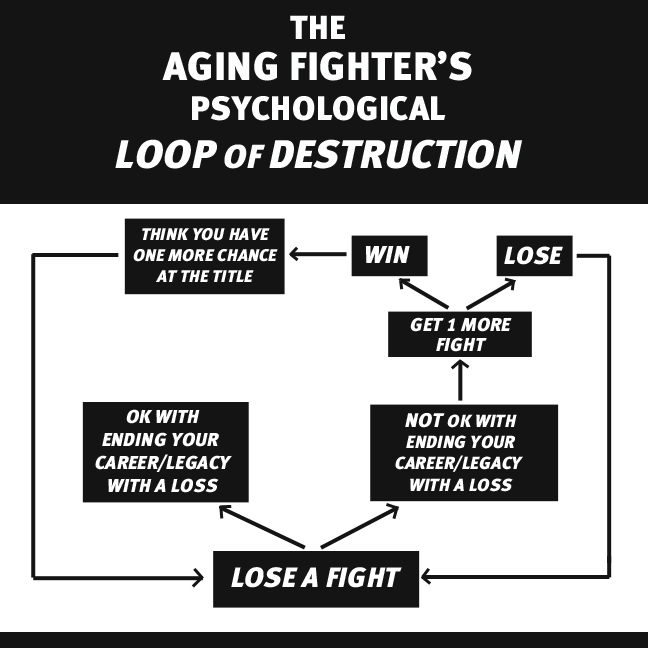 There's no high road here, when a legend continues to fight with the disastrous results that BJ has had these last several years, his fans can beg for him to stop. There is a whole generation of new MMA fans who never knew that dominant force that he was.... Never knew the champion who would step up to legit fight any man in any weight class.... All they see is this guy who is being told is a legend, and is losing repeatedly in often times non competitive fashion to guys who aren't considered "top tier". So what are you on about? As a friend to fighters as you say you are, I'm sure that you have been in that room as coaches and managers have told the fighters that it's time to hang it up, that it's time to move on to the next level for them.

MMA fans also don't have to pay for events, where they see a guy repeatedly lose, just because they're told that he's a "legend". I am the biggest BJ Penn fan, I met him after he beat my first coach in MMA/BJJ Din Thomas, he is a legend still for what he did/was.... and overblown true 145er who would challenge/fight the anytime/anywhere... But even now, I cringe every time I see his name pop up for a fight. As a coach, I can tell you that his striking has looked terrible, his timing is slow, his grappling/BJJ is not where it needs to be.... His heart is there, but the tools aren't sharp.... He NEEDS to hang it up, he's on the wrong side of 40, and now I consider his eventual life after MMA.

Don't be smug about this matter because you know fighters, hell if anything, you should understand better when it's time to move on.

BJ has nothing left to prove, he's a legit hall of famer and top-10 GOAT lister, but I don't feel he can cross over into "Legend" status until he stops fighting.