Daniel Snyder is owner of the Washington pro football team he grew up adoring. Would he ever consider changing the team name that many American Indians and others believe is a racial slur?

"We will never change the name of the team," Snyder told USA TODAY Sports this week. "As a lifelong Redskins fan, and I think that the Redskins fans understand the great tradition and what it's all about and what it means, so we feel pretty fortunate to be just working on next season."

What if his football team loses an ongoing federal trademark lawsuit? Would he consider changing it then?

Snyder does not often speak to the media about the case. He talked to USA TODAY Sports very briefly about it Tuesday afternoon, following a longer interview with him and his wife Tanya about her selection as mother of the year by the American Cancer Society. Team under pressure from American Indians and other who believe nickname is a racial slur.
www.usatoday.com

there's a certain amount of anti-social self-loathing that comes with being a 'Skins fan, Dan just embodies it more than most.

So stunning.
So BRAVE.

The name has been controversial for a long time. I have no problem with the insistence on changing it
J

redskins is just a straight up slur there is no other way to interpret that I am a person who say unpc things all the time but I'm not going to pretend like it is something else than a slur for 'merican indians.
J 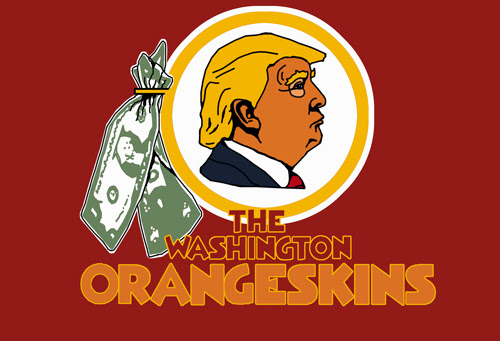 Should have fought harder instead of get drunk.

I think something's missing in the interest of fairness & equality: that reminds me of the movie Orgazmo funny film I barely saw it now that netflix has it.

So they are exploring a name change now.
J

Zeph said:
So they are exploring a name change now.
Click to expand...

they are going to call them "the Washington rapists and drug dealers" and have people jumping over a wall on the logo. fans will endearingly be called rapies or druggies.

Jesus X said:
they are going to call them "the Washington rapists and drug dealers" and have people jumping over a wall on the logo. fans will endearingly be called rapies or druggies.
Click to expand...

I had never even thought about the etymology of the names of teams until some bored silly social justice warrior brings it up.
It's the epitome of utopian 1st world problems when too LITTLE a life is being lived.
"Redskins"...so what?
"Blacks" aren't black, "whites" aren't white, chinese aren't yellow, and "rednecks" aren't red unless you shave that tan with a 5-year old Gillett.

That said, I really don't care, other than it's messing with sports lineage, which I'm sick and tired of.
(If it was up to me, as a sports director, I wouldn't even let teams trade players unless that person was a resident for six months drinking the water from that tap, like any other purchase of a taxed high performance good; they're entertainers intended for regional competition. And honestly, it's what competition is all about, and certainly why people get behind hometown heroes with heart and soul end rant/)

The OKC Thunder aren't the Supersonics, The Lakers have no lakes, The LA Rams couldn't even identify one, and Jazz is illegal in Utah.

The entire countries needs a whoopin', and just might get one soon.

I propose their new name as DC Crackers. It will keep the name within their traditional roots, and also it will honour the traditions of the team by sounding like they will crack and break in half like their defense does for Zeke every time they play.

“A happy life consists in tranquility of the mind”

Keep the name, change the mascot

“A happy life consists in tranquility of the mind”

This would actually be a great change:

The Redskins will still suck regardless of the name. My personal opinion is that I'm tired of this outrage culture and people should quit complaining so much.

Can't we just tear down some statues and call it a day?

Dan can keep the name if he buys Mt Rushmore and blows it up.

They should change it to the Washington wagon burners

Why do you trot this out at seemingly every opportunity?
You must log in or register to reply here.
Share:
Reddit WhatsApp Email Link
Top Bottom