Gaethje only interested in lightweight title, willing to serve as backup for UFC 249 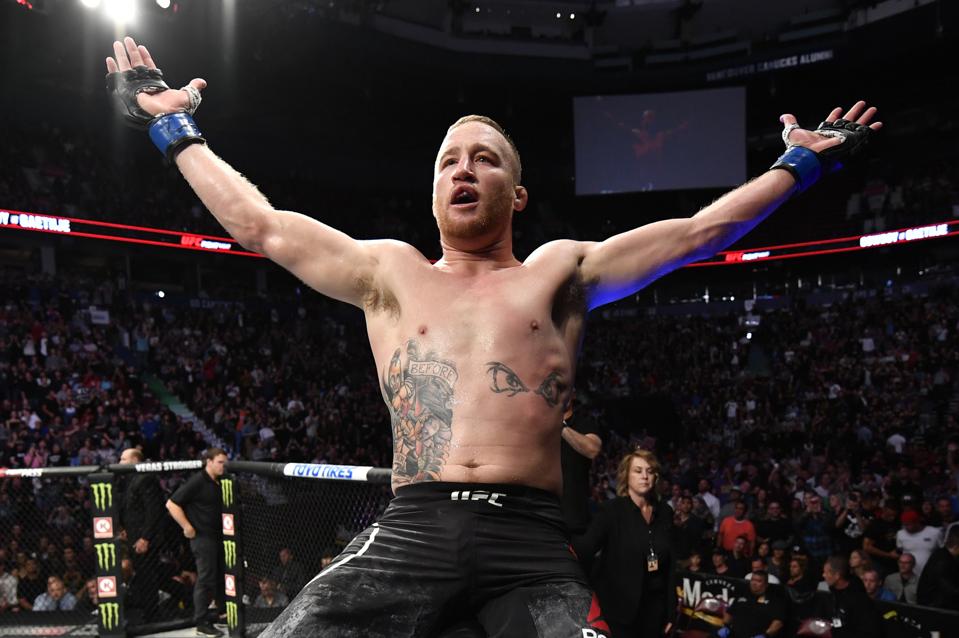 Last week two massive fights were announced involving most of the top-ranked 155ers in the UFC: Khabib Nurmagomedov vs. Tony Ferguson for the lightweight championship and Conor McGregor vs. Donald Cerrone, oddly contested at 170 pounds. And with Dustin Poirier currently recovering from surgery, that leaves the last remaining top-5 lightweight out in the cold, one Justin Gaethje.

“I’m the guy waiting for the title shot,” Gaethje told The Luke Thomas Show recently when discussing his place in the lightweight title picture. “I got the winner of the fight in April, as far as I’m concerned. Three knockouts in a row. I’m not sure what else I need to do? If there’s someone else in the way, then I would happily go through them, but I don’t think there is.

“So the winner of that is looking most likely. I’m planning on trying to maybe push myself to be ready for around that date just in case something happens but it’s super hard for me to get up for a training camp, to get up for a fight when I don’t actually have an opponent. So I don’t know if that’s gonna happen.”

If Gaethje does choose to sit to face the winner of Khabib vs. Tony, he could be on the shelf for quite some time. The lightweight title fight is taking place in April. Should Ferguson win, Gaethje might be able to expect a quick turnaround, but if Nurmagomedov retains his title, it’s unlikely he’d fight again until the late summer or early fall, after the month of Ramadan is over and Nurmagomedov can have a full training camp of preparation. And if that’s the case, Gaethje says he’s fine with it because he’s only got his eyes on one thing: the belt.

“Ultimately I got into this for one reason and that’s to fight for a world championship,” Gaethje said. “So if that’s at the end of the road, then absolutely. I don’t want to [wait]. I’m not getting any younger, but I want to fight for the world title. I’m not going to be a fool, I’m going to make smart business decisions from here on out. Not strictly but I mean right now, three wins in a row, three knockouts, three first-round finishes in a row, so that’s what I’m looking for.”

Of course, there’s another scenario that could play out here. Cerrone and McGregor fight in January and, though the bout is at 170 pounds, many have speculated that with a win, McGregor might be reinserted into the title picture at lightweight. But Gaethje thinks that’s probably not accurate. He recognizes that waiting for the winner of the title fight is a risk, but he still believes that Conor will need a win at 155 in order to justify a title shot.

“I don’t know. I think the fact that he’s fighting at 170 just takes it off the table that the next fight is - who knows?” Gaethje said. “Khabib stated publicly that he won’t fight the guy. I really - he might fight GSP after this - I really don’t know. There’s so many scenarios that could happen right now but in my mind, Conor could fight Cowboy but if he wants to fight for a world title he has to get another win that’s in the lightweight division. It’s as easy as that. It could be me it could be Poirier. It doesn’t matter which one but it has to happen.”

McGregor vs. Gaethje could be an excellent stopgap for the UFC while the wait for UFC 249 and the lightweight title to open up. The two are probably the two most exciting fighters in the UFC and Gaethje has already been calling out McGregor for some time. On top of that, McGregor seems to be targeting three fights in 2020, Cerrone, another opponent, and then Khabib near the end of the year. Beating Gaethje would almost certainly guarantee him that opportunity. Gaethje says that cuts both ways and, perhaps more importantly, would ensure that Conor does not leapfrog him in line.

“I want the winner of Tony and Khabib,” Gaethje said. “When I fought he was retired. After I fought he was not retired so that’s why I started calling him out, because that was the most direct path to the title shot. And to avoid him trying to fight somebody else and try to jump past me. I’m under contract, I’m not gonna fight him for any more money. He’s not a champion, I’m not fighting for a world title so I was going to fight him for whatever money is in my contract for the next fight. Doesn’t matter if I fight him, if I fight Poirier, if I fight [Dan] Hooker, it’ll be the same amount of money. So that is irrelevant. I wanted to fight him because that’s the most direct path to the lightweight championship.”

Then again there’s another option available to Gaethje: training like he’s going to fight at UFC 249 anyway. The fight between Khabib Nurmagomedov and Tony Ferguson is one of the most notoriously snakebitten fights in UFC history. Four times the bout has been booked and four times it has fallen apart and at this point, most fans are trying not to get their hopes up for fear of being let down yet again. So given that, Gaethje says he will be happy to serve as a backup to the main event, if the UFC makes it worth his while.

“If they cover the cost of the training camp, then I’m in,” Gaethje said. “I need to get in shape anyways, so it couldn’t hurt. But again, you know what it is. Financially, it’s a commitment to train for a fight, especially for a fight like that. I wouldn’t be against it. Ultimately, I want to fight Khabib. I have to fight Khabib. If that’s ultimately how it goes down, I will only be mad at myself if I’m not ready for it.”

Morning Report: Justin Gaethje only interested in lightweight title, willing to serve as backup for UFC 249 under right conditions
You must log in or register to reply here.
Share:
Reddit WhatsApp Email Link
Top Bottom