UFC fighter Irwin Rivera was arrested Thursday on two counts of attempted murder, according to an incident report obtained by ESPN.

He was booked just after noon local time after being apprehended by the Boynton Beach Police Department and is being held without bail, per online jail records.

Boynton Beach police officers found two women -- one age 22 and the other age 33 -- with multiple stab wounds after being called to a residence, per the incident report. The younger woman had wounds in her back, head and arm. The older had wounds on her back, face, arms and hands. Both were alive and were rushed to a hospital.

One of the sisters told police that they were staying with their brother, Rivera, in one of his spare rooms and they awoke to Rivera repeatedly stabbing them with a knife, according to the report.

Rivera fled the scene. Police made contact with him at about 7 a.m. local time on Thursday morning and, per the report, Rivera said, "I killed my sisters." According to the report, Rivera told police that he entered his sisters' bedroom while they were sleeping and stabbed them with a "brass knuckle knife." Rivera told police that he believed he had killed his sisters and he did it because it was his purpose, told to him by a "higher power"

In a statement, the UFC said it is investigating the "extremely troubling" situation and would not be offering Rivera a fight at this time.

"UFC is aware of the recent incident involving Irwin Rivera and subsequently received information from his management that he has been exhibiting behavior consistent with mental health issues," the UFC statement read. "The allegations are extremely troubling and the organization is currently gathering additional information. The investigation is ongoing and any potential next steps including disciplinary action or medical attention will be determined upon the conclusion. Furthermore, UFC has informed Rivera's management that he will not be offered a bout at this time."

Rivera, 31, last fought at UFC Fight Night: Covington vs. Woodley on Sept. 19, losing a split decision to Andre Ewell. Rivera debuted for the UFC in May and earned his first UFC victory, beating Ali AlQaisi in August. Rivera is the former Titan FC bantamweight champion. 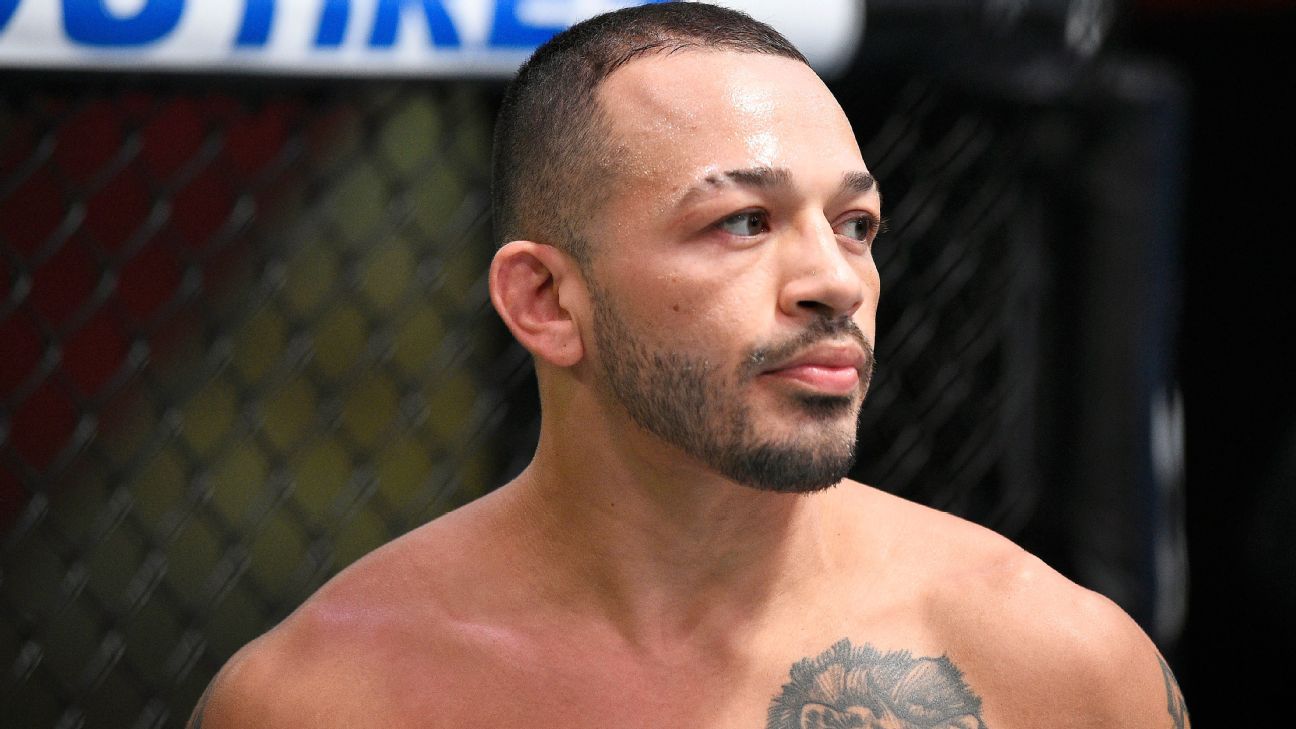 UFC fighter Irwin Rivera was arrested Thursday in Florida on two counts of attempted murder, according to an incident report obtained by ESPN.

The Rona has gone too far! 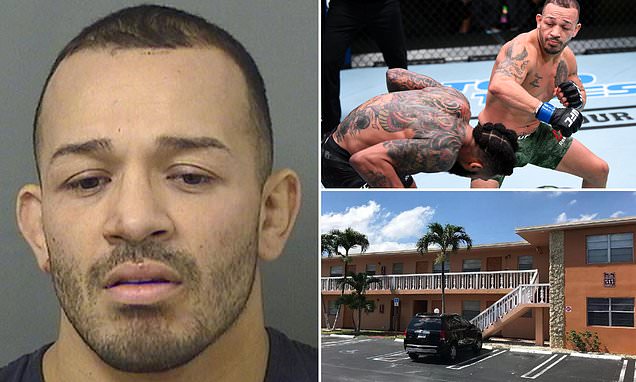 Fighter Irwin Rivera arrested for attempted murder of both sisters

Irwin Rivera , 31, was arrested Thursday on two counts of attempted murder. Rivera is accused of stabbing his two sisters, 22 and 33. Incredibly, both are alive and recovering in a Florida hospital.

The way he walked through Gigas striking not batting an eye lead me to believe he was psycho.

Thuglife13 said:
The Rona has gone too far!
Click to expand...

Dude for real. There are now dozens of psychosis related covid cases Most had no history of mental illness and became psychotic weeks after contracting the virus. Cases are expected to remain rare but are being reported worldwide.

Most had no history of mental illness and became psychotic weeks after contracting the virus. Cases are expected to remain rare but are being reported worldwide.

"The patient, a 42-year-old physical therapist and mother of four young children, had never had psychiatric symptoms or any family history of mental illness. Yet there she was, sitting at a table in a beige-walled room at South Oaks Hospital in Amityville, N.Y., sobbing and saying that she kept seeing her children, ages 2 to 10, being gruesomely murdered and that she herself had crafted plans to kill them.

The patient described one of her children being run over by a truck and another decapitated. “It’s a horrifying thing that here’s this well-accomplished woman and she’s like ‘I love my kids, and I don’t know why I feel this way that I want to decapitate them,’” he said.

The only notable thing about her medical history was that the woman, who declined to be interviewed but allowed Dr. Goueli to describe her case, had become infected with the coronavirus in the spring. She had experienced only mild physical symptoms from the virus, but, months later, she heard a voice that first told her to kill herself and then told her to kill her children.

At South Oaks, which has an inpatient psychiatric treatment program for Covid-19 patients, Dr. Goueli was unsure whether the coronavirus was connected to the woman’s psychological symptoms. “Maybe this is Covid-related, maybe it’s not,” he recalled thinking.

“But then,” he said, “we saw a second case, a third case and a fourth case, and we’re like, ‘There’s something happening.’”

Indeed, doctors are reporting similar cases across the country and around the world. A small number of Covid patients who had never experienced mental health problems are developing severe psychotic symptoms weeks after contracting the coronavirus."

"A 36-year-old nursing home employee in North Carolina who became so paranoid that she believed her three children would be kidnapped and, to save them, tried to pass them through a fast-food restaurant’s drive-through window.

A 30-year-old construction worker in New York City who became so delusional that he imagined his cousin was going to murder him, and, to protect himself, he tried to strangle his cousin in bed.

A 55-year-old woman in Britain had hallucinations of monkeys and a lion and became convinced a family member had been replaced by an impostor."

" a 49-year-old man who heard voices and believed he was the devil and a 34-year-old woman who began carrying a knife, disrobing in front of strangers and putting hand sanitizer in her food."

"The symptoms have ranged widely, some surprisingly severe for a first psychotic episode, experts said. Dr. Goueli said a 46-year-old pharmacy technician, whose family brought her in after she became fearful that evil spirits had invaded her home, “cried literally for four days” in the hospital.

He said the 30-year-old construction worker, brought to the hospital by the police, became “extremely violent,” dismantling a hospital radiator and using its parts and his shoes to try to break out of a window. He also swung a chair at hospital staff.

How long the psychosis lasted and patients’ response to treatment has varied. The woman in Britain — whose symptoms included paranoia about the color red and terror that nurses were devils who would harm her and a family member — took about 40 days to recover, according to a case report.

The 49-year-old man treated at Montefiore was discharged after several weeks’ hospitalization, but “he was still struggling two months out” and required readmission, Dr. Gabbay said.

The North Carolina woman, who was convinced that cellphones were tracking her and that her partner would steal her pandemic stimulus money, didn’t improve with the first medication, said Dr. Jonathan Komisar at Duke, who said doctors initially thought her symptoms reflected bipolar disorder. “When we began to realize that maybe this isn’t going to resolve immediately,” he said, she was given an antipsychotic, risperidone and discharged in a week.

The physical therapist who planned to murder her children had more difficulty. “Every day, she was getting worse,” Dr. Goueli said. “We tried probably eight different medicines,” including antidepressants, antipsychotics and lithium. “She was so ill that we were considering electroconvulsive therapy for her because nothing was working.”

Boynton Beach is a shithole. Only slightly better than Pompano Beach...

Bones Nose said:
the UFC said it is investigating the "extremely troubling" situation and would not be offering Rivera a fight at this time.
Click to expand...

This whole story is effed up, but the wording of this line made me bust out laughing.
You must log in or register to reply here.
Share:
Reddit WhatsApp Email Link
Top Bottom