Ragin Al vs Platinum should be interesting for the MMA crowd

I've never watched a tag team match but they seem to be trending.

Boogeyman is always entertaining so I look forward to that one. I think he may have Shields' number.

Super Dave said:
Boogeyman is always entertaining so I look forward to that one. I think he may have Shields' number.
Click to expand...

this needs to be a Combat JJ match...

FORMAT:
● Each team will choose which competitor in their team starts out the match with the opposing team’s chosen competitor. To allow for neutral position, the chosen competitors will lay center cage flat on their back opposite of each other (head to feet) with one palm touching the other’s palm until the ref/staff start the clock.
● Any teammate not engaged in the match, must have either one hand or one foot against the cage wall between their designated color corner barriers.
● No formal coach cornering will be allowed during the tag team matches.

TAGGING:
● Should a competitor initiate a tag, they must do so by touching their teammate’s hand or foot to allow the teammate to leave the cage wall and engage in the action. At the point of tagging, the competitor who initiated it has 3 seconds to disengage from the match and then they must immediately place themselves back between their color corner barriers on the cage wall until tagged back in.
● In the event of a verbal or physical tap, the competitor who was subbed immediately switches out with their teammate. At this point, the competitor who got the submission has the choice to switch with their teammate but it is not required.
● When switching with a teammate occurs after a submission, the competitors are expected to immediately engage. No standing up or center cage neutral positioning will happen aside from the start of the match.
● Tagging of a teammate can happen at any time during the tag team match, including when a competitor is involved in a submission attempt.
● In the event that a competitor does not tap and goes out from a submission, he/she can no longer compete in the match. The teammate of that competitor can decide at that moment if they would like to continue or forfeit to the opposing team.

FOULS:
● Should a competitor attempt to go past the 3 seconds of transition to lock in a submission, and a submission does occur, the ref will deem it invalid.
● In the event of an injury to the opposing teammate during double teaming, the ref will deduct one submission point from the team that caused the injury if it only required short time for recovery while the other teammate engaged in the match. Should the injured person be no longer able to compete in the match, the ref will deduct two submission points from the opposing team.
● If a person tags in without their hand or foot on the cage and/or without touching their teammates hand or foot, the ref will switch them back immediately and the match will resume on the feet or continue in position if the person swapping was in a current sub attempt.
● If illegal technique is used in a match involving a teen, the position will be forfeited by the ref. If illegal technique is used and a submission occurs, the team utilizing that technique will lose 2 submission points

I hope Plat Mike humiliates Ragin Al, the fucker squirted monica with a water pistol at the UFC Retreat 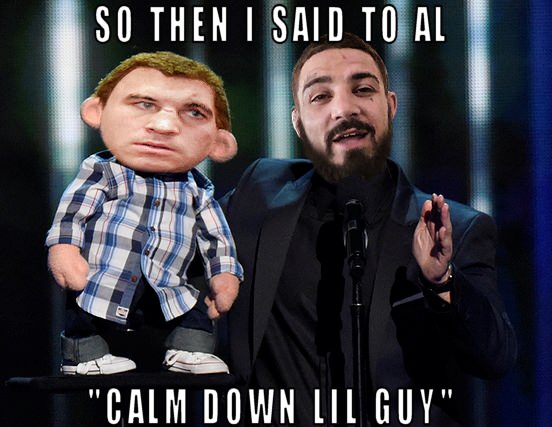 It's like wwe but you got 3 seconds. Dangerous situation if the ref gets hurt cause vinny will be using steel chairs

Bones Nose said:
It's like wwe but you got 3 seconds. Dangerous situation if the ref gets hurt cause vinny will be using steel chairs
Click to expand...

3 seconds to stop grappling after you tag in someone. You can't double team or make a magalhaes sandwich I think. Maybe.

Now leave me alone. We were never friends
M

Great card, the SUG events are really stepping up as premier events. While Jones/Ryan would have been a beast of a team, Nicky Rod/Jones may be even better... Let Nicky start, wear down Kyle and Vinny with chain wrestling and a servo of Takedowns.... And then Jones comes in to finish them off.
M

Side note, my buddy Alex has been doing those tag matches down in South Florida at his Sub Stars event.... Rumor has it that he's putting together a big card for Feb 22 (I don't know if he's announced it yet, but it'll be an interesting main event that will be talked about).
You must log in or register to reply here.
Share:
Reddit WhatsApp Email Link
Top Bottom