Tito Ortiz to start training to become a Fireman

I read somewhere that Tito has moved on from thinking about politics, and from being a policeman a few days ago.. he would now like to beat forest fires into a living death and become a dedicated fireman, in full uniform, standing next to a shiny truck.

he said he hasn't put his application in yet because he has a phone call scheduled for this afternoon, to discuss the potential of him becoming a dentist.

he also hasn't had the chance to negotiate his pay with the fire service. he said he needs to cut a deal to make it work. he isn't working for no chump change.

every damn interview he talks about how he has a house on th water, a boat, and a rolls royce
wonder how much of that $ he got from jenna and child support

if only his brain was as big as his heart...

Dickless Cage said:
every damn interview he talks about how he has a house on th water, a boat, and a rolls royce
wonder how much of that $ he got from jenna and child support

I thought the Rolls got repossessed a couple years back. 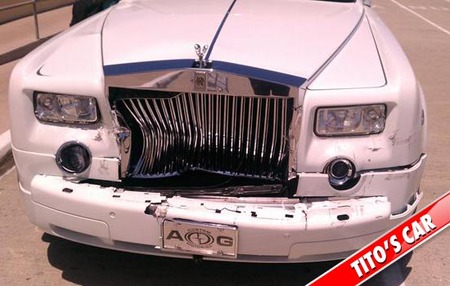 These are sad days for fans of the British luxury car brand, and for one Rolls-Royce own in particular: Tito Ortiz, the former UFC Light Heavyweight Champion managed to damage his Phantom.

Also known as an amateur racer, Ortiz was involved in a three-car collision and his Rolls took the hit where it hurts the most - right in its famous chrome grille, TMZ reports.

It happened in Costa Mesa, California, near a Denny's restaurant the past weekend, and luckily no one, besides the vehicles involved, got hurt. While we don’t know who was at fault for the incident, a Twitter feed from Ortiz revealed that it ended up with a really damaged pocket - he will have to pay for the repairs himself, as the insurance would not cover the expenses.

This is not the first car crash that Tito Ortiz is involved in the last months. As a participant in the Toyota Pro/Celebrity Race, the American mixed martial artist crashed a race-ready Scion tC during a practice run. The first impact happened when he drove the car into a sidewall and then hit the rear bumper of another car that was driven by “Blood Diamond” star Djimon Hounsou.

cracks me up when people tie their money up in crazy fragile hyper-luxuries. like they know for 100% that their luck with cash and opportunities will last for decades

Boys 5 and under like playing fireman and they piss out the flames. Tito probably still does that, and doesn't grasp what actual firemen do.

Papi Chingon said:
Boys 5 and under like playing fireman and they piss out the flames. Tito probably still does that, and doesn't grasp what actual firemen do.
Click to expand...

I still do that

Inside Job said:
I still do that
Click to expand...

The yellow theme has piss on my mind. Every comment tonight will be piss related.

Side note: good for you. We all have a little fireman in us.

Papi Chingon said:
Side note: good for you. We all have a little fireman in us.
Click to expand...

oh by the way.. in a significant blow to Police recruitment, the Fire Service Show Business Department and the American Dentistry Association... Tito has decided to run for a seat on his local council the next two words I post, will conclusively demonstrate that this is a bad idea: budget meetings

Dickless Cage said:
tito does everything he can to keep his name in the spotlight
Click to expand...

like i said before...
would he be the first council-dude to have no degree?

never was no degree

Dickless Cage said:
i think hes been taking public speaking classes cuz he aint trippin over his tounge much lately
its too bad cuz those political speeches woulda been hilarious
Click to expand...

warning, this is absolutely full-Tito

that CTE must be bad. did he say he married his son and the mother was the one who married them lolwut. i'm actually genuinely concerned seems to have a problem putting words together.

Does he mean Mexico when he says Mezco?

jimmy boogaloo said:
I saw the fucking idiots on reddit, laughing this up like the unkind p.o.s. who stitched her up were some kind of comedy god. is that what being an mma fan is these days?

I'm not a particular fan of Jessica's but she's obviously faced real struggle in her life, so for the fans to rip the piss out of her for $25 is pretty unkind.
Click to expand...

I think it's because she appears to be so unaware of how awkward and cringe-tastic she is when she's trying to get support. I definitely liked her better years ago when she didn't seem to try so hard to be likable.
You must log in or register to reply here.
Share:
Reddit WhatsApp Email Link
Top Bottom