General Trump is scum re. the kurds 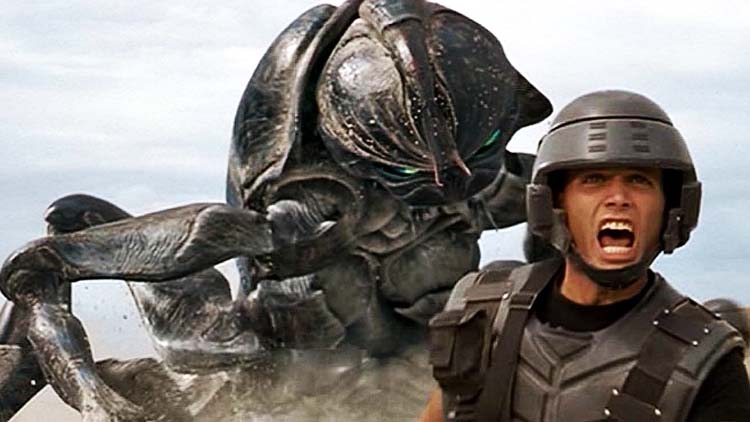 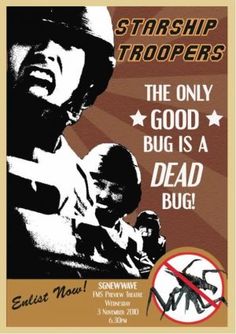 Megaterio Llamas said:
If you ever want to see this hokey, romanticized, gung ho, US war culture satirized in film check out the brilliant science fiction satire movie Starship Troopers. It nails it so precisely that most movie goers didn't pick up on that they were watching a satire and enjoyed it as a straight space adventure. It is absolutely a masterpiece, brilliant in every respect. You might even recognize your young self in the idealistic young brainwashed patriots as they ship off into outer space to fight the dirty, evil bug planet.
Click to expand...

funny that you mentioned that because the Starship Troopers book was on the commandant's reading list when I was a boot.

tang said:
funny that you mentioned that because the Starship Troopers book was on the commandant's reading list when I was a boot.
Click to expand...

The British far right party UKIP has started to use slogans from the 1997 sci fi satire Starship Troopers, so Kevin and I thought iot prudent to discuss the ...

Do they understand it's satire, ie antiwar?

Of course they do. They're insane.

Kneeblock said:
I'm not watching a YouTube video. I grew up in NY and was there for most of Trump's life in the public eye. He was one of many realtors who dealt with the mob and the teamsters to get his name on contracts and mostly only made big ticket projects that ripped up whole portions of the city and turned them into luxury housing to accommodate the financial services industry (most of whom live outside NYC anyway). Most of what he contributed to NY was keeping tabloids like the Daily News and the NY Post busy covering his various marital scandals, discrimination cases, and ceaseless self promotion. He paid to make sure his name and face were everywhere and he's still doing that in a way, except now he's got a whole apparatus of government, a political party, lobbyists, and a few media outlets to also promote his brand. It's like being in the White House is his ultimate MLM scam. Of all the people with a wtf reaction to Trump, New Yorkers have it the worst because we can't believe one of our home grown grifters escaped the asylum. For most of us, he's in the same category as squeegee men.
Click to expand...

Well maybe just the first 15 minutes, then you can put it on your watch later group.
I think you'd really enjoy all the content, which is vast and interesting.

Megaterio Llamas said:
Do they understand it's satire, ie antiwar?

Of course they do. They're insane.
Click to expand...

wouldn't be surprised if some of them took it seriously. there are whole bunch of lifers.

tang said:
wouldn't be surprised if some of them took it seriously. there are whole bunch of lifers.
Click to expand...

It certainly can be taken that way. As I said, most movie goers back then seemed to enjoy it as a straight sci fi space adventure.They don't recognize their own society. And the original novel by Robert Heinlein was definitely a fascist science fiction story.
Last edited: Oct 8, 2019

Starship Troopers: One of the Most Misunderstood Movies Ever

The sci-fi film's self-aware satire went unrecognized by critics when it came out 16 years ago. Now, some are finally getting the joke.

When Paul Verhoeven’s Starship Troopers hit theaters 16 years ago today, most American critics slammed it. In the New York Times, Janet Maslin panned the “crazed, lurid spectacle,” as featuring “raunchiness tailor-made for teen-age boys.” Jeff Vice, in the Deseret News, called it “a nonstop splatterfest so devoid of taste and logic that it makes even the most brainless summer blockbuster look intelligent.” Roger Ebert, who had praised the “pointed social satire” of Verhoeven’s Robocop, found the film “one-dimensional,” a trivial nothing “pitched at 11-year-old science-fiction fans.”

But those critics had missed the point. Starship Troopers is satire, a ruthlessly funny and keenly self-aware sendup of right-wing militarism. The fact that it was and continues to be taken at face value speaks to the very vapidity the movie skewers.

Starship Troopers is set in the distant future, when humankind has begun to colonize worlds beyond the borders of our galaxy. Earth has provoked an otherwise benign species of bug-like aliens to retaliate violently against our planet, which it suddenly and correctly perceives as hostile. Interpreting what are pretty obviously self-defense tactics as further gestures of aggression, humankind marshals its global forces and charges into a grossly outmatched interstellar war. The rhetoric throughout is unmistakably fascistic: Earth’s disposable infantrymen, among whom our high-school-aged former-jock hero naturally ranks, are galvanized by insipid sloganeering, which they regurgitate on command with sincerity as they head to slaughter. (“The only good bug is a dead bug!” is the chant most favored—shades of Animal Farm abound.)

The resulting film critiques the military-industrial complex, the jingoism of American foreign policy, and a culture that privileges reactionary violence over sensitivity and reason. The screenplay, by Robocop writer Edward Neumeier, furnished the old-fashioned science-fiction framework of Robert A. Heinlein’s notoriously militaristic novel with archetypes on loan from teen soaps and young adult-fiction, undermining the self-serious saber-rattling of the source text. Even the conclusion makes a point of deflating any residual sense of heroism and valor: We see our protagonists, having narrowly escaped death during a near-suicidal mission, marching back to battle in a glorified recruitment video—suggesting that in war the only reward for a battle well fought is the prospect of further battle.

Over the nearly two decades since the film’s debut, the critical reputation of Starship Troopers hasn’t especially improved. But you can feel the conversation beginning to shift; it rightfully has come to be appreciated by some as an unsung masterpiece. Coming in at number 20 on Slant Magazine’s list of the 100 best films of the 1990s last year (a poll in which, full disclosure, I was among the voting critics), the site’s Phil Coldiron described it as “one of the greatest of all anti-imperialist films,” a parody of Hollywood form whose superficial “badness” is central to its critique. It fared well in The A.V. Club’s ‘90s poll, too, appearing in the top 50, where it was praised as a “gonzo satire destined, even designed, to be misunderstood.” Scott Tobias, former editor of the A.V. Club’s film section, lauded Troopers a few years earlier as “the most subversive major studio film in recent memory,” observing that it “seems absurd now to write it off as some silly piece of escapism, as its detractors complained.”


But the original misperceptions still persist. On October 4th, RiffTrax—a series of downloadable comedy commentary tracks from the creators of Mystery Science Theater 3000—released an episode in which they mocked Starship Troopers, a movie their website describes as “dumb and loud” and a “goofy mess.” Mike J. Nelson and his RiffTrax co-stars Kevin Murphy and Bill Corbett heckle the film with about as much insight and wit as they misperceive the film to have. Sample humor: At one point, a bomb destroys a giant bug, and the three of them yell “Oh no, Raid!” Later, Denise Richards smiles, and someone says, in a robotic voice, “Smile-o-tron 3000 engaged.” It goes on like this. The tagline for RiffTrax is “Your favorite movies—made funny!” What they don’t seem to understand is that Starship Troopers already is funny—and smart.

Troopers, of course, is far from the only instance of a film being popularly misinterpreted. Given enough distance even the most fervently reviled movie may one day find its legacy resuscitated, earning decades later its long overdue acclaim. Maybe that time is near for Troopers; hopefully, at least a few Rifftrax listeners newly introduced to the film picked up what was really going on. If you’re open and attuned to it—if you’re prepared for the rigor and intensity of Verhoeven’s approach—you’ll get the joke Starship Troopers is telling. And you’ll laugh.

Megaterio Llamas said:
Seriously though, if you Yanks care anything for our friend

Splinty said:
Didn't just leave them. Allowed Saddam to have gunships to mow them down after we encouraged their uprising. Despite a no fly zone for fixed wing aircraft.
Click to expand...

don't forget the Shiites in the marshlands.

sparkuri said:
It's what they didn't do...
Click to expand...

don't ask for what you can't afford.

sparkuri said:
Personally, I'm tired of keeping up on every group on earth and their history of wars and uprisings.
It's my opinion as of now, Trump is making moves/counter moves; trying to get countries to jump off sides.
It makes sense since China and Russia's significant rise in power over the 10+ years.
Turks are imbalanced nuts and looking to powerplay the region while the superpowers volley over which club they should join.
That said, and with the weariness over picking sides over 100 countries and determine justice globally, I'm content to mind our own gawtdamn business as we should have decades ago.
If the globalists truly want to impose their version of morality over the planet in the name of social utopia, let the virtue-signaling eurotrash take their resolution to the UN and we'll see who jumps on board.
As it stands, we can't protect our own fucking borders, and we've got a media-induced information war dividing our own country to deal with.
Click to expand...

Completely agree. Yanks have a ton of problems with their own country, fix yourselves before sticking your nose in to other countries business.

Leigh said:
Completely agree. Yanks have a ton of problems with their own country, fix yourselves before sticking your nose in to other countries business.
Click to expand...