UFC 264 video: Conor McGregor threatens Dustin Poirier after loss: ‘In your sleep, you’re getting it’

Now he's threatening to kill his daughter too. This is insane, even for this scumbag. 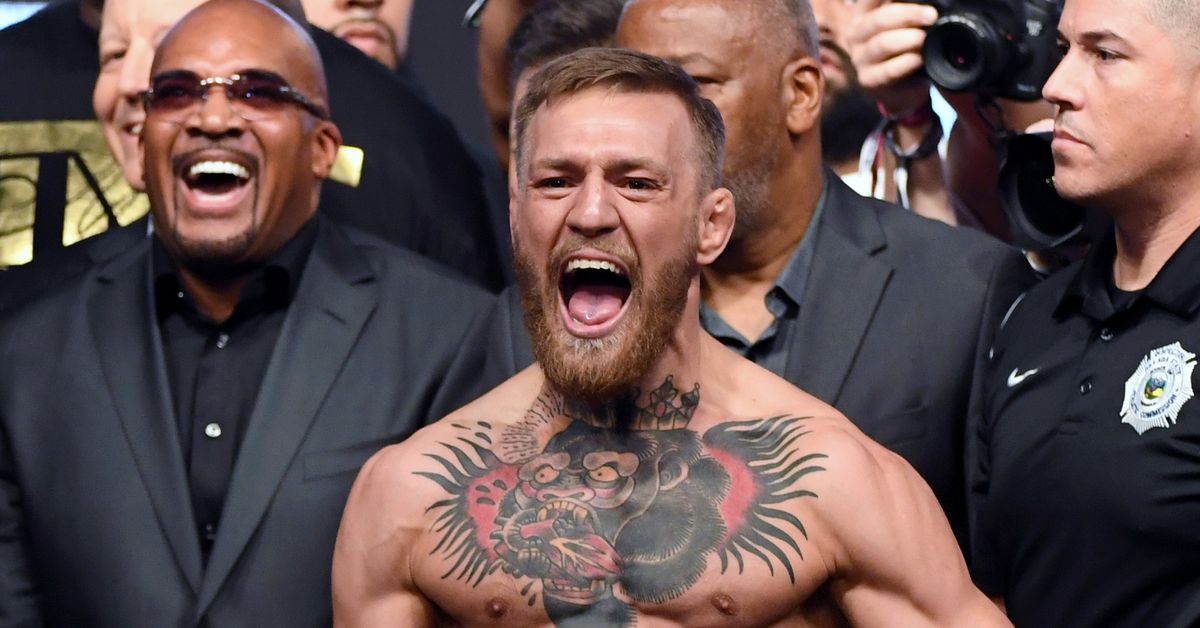 Conor McGregor continues to attack Dustin Poirier and his family for losing at UFC 264 and breaking his "Notorious" leg back on July 10 in Las Vegas.

speaking of sleep
remember the last time they fought where conor didnt break his ankle?

Shorinji said:
Now he's threatening to kill his daughter too. This is insane, even for this scumbag.

Conor McGregor continues to attack Dustin Poirier and his family for losing at UFC 264 and breaking his "Notorious" leg back on July 10 in Las Vegas.

Crazy that so many of you still support this scumbag piece of shit.

pre fight talk:
Conor McGregor: (05:34)
You’re going to walk like a dog in that octagon on Saturday night.
Conor McGregor: (05:54)
You’re only a little bh. Your wife is your husband. You’re only a little bh of a thing; a silly little hillbilly. Joe Lee’s wife, Joe Lee’s wife, Joe Lee’s wife, you little b***h of a thing.
Conor McGregor: (07:00)
Yeah. Shut your mouth, you little filly or I’m going to dance on your head.
Conor McGregor: (07:18)
I’m going to go through his head, put holes in them, and take it off his shoulders. That’s the goal here. He’s done here. This is it for him. This is the end of the road. Even after that last fight, “Oh, I don’t love this anymore. I don’t love doing this.” He knew what was coming. He knew the smacks he took. It’s on, now. Saturday night, he’s getting walked around that octagon like a dog and put to sleep.
Conor McGregor: (09:43)
I see a corpse.
I’m a lock. I’m going to kill this man. last time we were up here, you were giving us all a large one. Saying, oh, the title means everything. Yet here you are looking for the bread and the butter, you little fake c***.
No, he’s not in the same stratosphere as me. The man looks disgraceful up here. He looks frail. He looks frail at this weight now. I’m telling you, his head, his body, his frame, his eyes. That weight class is getting to him. I’m all the way, ready to go. There’ll be no 155, there’ll be nothing free given here. Everything is getting took here.
I don’t give a f**k about him, to be honest. I don’t give a rat’s ass about him. He’s Buster Douglas. He’s Buster Douglas, is what he is and that’s the way he’s going to go down. He’s going to be known for that. It was a fluke win and I’m going to correct it on Saturday night.
I’ll go smash your nose in and then I’ll laugh. Then, I’ll laugh.
Fk the entire roster. I see the way it is. You try and be nice to them, you try and help them out, but fk them all now. It is what it is and that’s it. I’m coming for all of them.
Nobody’s coming on, you tit. [inaudible 00:21:10] Pauli Malignaggi inspiring in the lead up to [inaudible 00:21:14] Floyd, one of the better boxers on this f**king planet, you stupid tosspot. We didn’t ring anyone’s ass for any bleeding info on you, you dope.
I’ve had an incredible career. Long may it continue.
Conor McGregor: (25:09)
No, I said I’m going to take him out in a stretcher. He’s going out in a stretcher in this fight. LOS ANGELES—Rushed to hospital after a gruesome loss Sunday at UFC 264, Conor McGregor reportedly underwent surgery for three hours Wednesday to repair a fractured ego. “We’re able to salvage it thanks to an intramedullary rod and some small screws, but it was already incredibly fragile before...