Diego Sanchez released from the UFC

ranier wolfcastle said:
he hasnt been good for years
but i wonder if he will go to bellator
Click to expand...

It's possible, but I could see Coker passing on this due to the weirdness going on right now.

I would also bet money that greasy Feldman fucker that runs BKFC is going to make an offer.

Personally, I kind of hope he retires. I don't think he needs to take any more damage. He can still be involved with the sport in other ways.

MyWifeYellsJAKEPAULinBed said:
I don’t think Dana is being completely honest here. I think he’s just trying to frame it as simply, Diego and his crazy coach won’t say that he’s medically fight to fit, and that’s the issue.

With the asking for old medical records, I wouldn’t be surprised if Fabia is trying to put together a lawsuit for Diego’s CTE. That would be where the money is.

Diego’s contract was cancelled because an attorney working on his behalf “couldn’t confirm his health wasn’t compromised”. Seems to me they are afraid signing off on his health would hurt them in their incoming CTE suit. Asking for the past medical records would be their way of establishing a timeline proving his brain damage occurred during his UFC career.

Dana not being totally honest is a legit possibility here. But IF Diego or his coach actually wouldn't say if he was medically fit to fight or not, that seems like a pretty good reason not to send him out there. I read that Diego refused to directly answer the question. Wouldn't that also be a major issue for the athletic commission? (not just Dana/UFC)

Like I said, if that is true, there is good reason for the hesitancy to have him fight.

What a wild situation to pop up last minute, I guess we'll see how it shakes out.

Diego got paid his win & show money from the UFC.

whoa ... imagine if you actually predicted whats realllly going on here (he is not A-list, but its potentially a good fight, before Diaz, before Conor) the latter two which seem to be Jake's plan asap

There are a few different ways.

1.Just copy the GIF (not the link) and paste it here. (Doesn't always work as files may be to big.)

2.Copy the link to the Gif you want to use then paste it in the Insert Image tab.

Enock-O-Lypse Now! said:
There are a few different ways.

1.Just copy the GIF (not the link) and paste it here. (Doesn't always work as files may be to big.)

2.Copy the link to the Gif you want to use then paste it in the Insert Image tab.

that was actually really helpful. thanks!

kaladin stormblessed said:
whoa ... imagine if you actually predicted whats realllly going on here (he is not A-list, but its potentially a good fight, before Diaz, before Conor) the latter two which seem to be Jake's plan asap
Click to expand...

I have my thumb on the pulse of Diego Sanchez.

Fucked around and found out

Jesus X said:
lol fabia protects diego like he was diegos lover that was very weird and deranged.
Click to expand...

lol he is brandishing a knife he is committing like 3 or 4 crimes there if they actually wanted to press charges they probably could have legally shot him then we could have had BLM protest.

That would be all bad for Jake Paul...

Thuglife13 said:
That would be all bad for Jake Paul...

Thuglife13 said:
That would be all bad for Jake Paul...

im not sure diego would win because his chin is gone and hip surgery probably ruined his agility jake is also 4 inches taller. jake fighting two guys who have had hip surgery is a bit funny.

ooooof listened to this whole thing. it was heavy going and required 4 pauses.

1) I have never supported the ufc in a situation as much as i do here. they had no choice when dealing with this guy.

2) josh fabia is a fraud. verbally treading water and trying (failing) to use misdirection. absolute cunt

3) to think this video puts him in a good light is insane. honestly he must be ill. and of course let's assume he has full control of Diego's social media 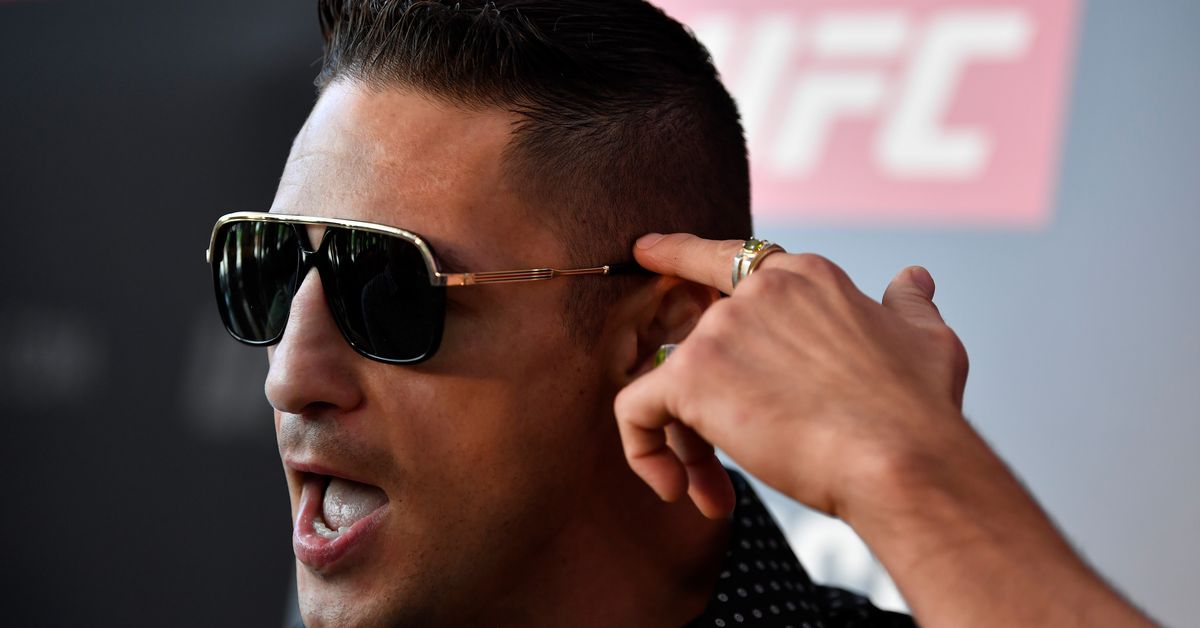 Diego Sanchez breaks his silence on what really happened behind the scenes that led to his UFC release.

An insider told me he was cut because Dana didn't want to be charged with being an accomplice in Donald Cerrone's murder after they found out Diego has been learning Fabias secret lethal techniques.
Fair enough I say.

there's another gif of diego doing the yes.. but with random wtf popping up as he does that.. so appropriate atm


lol the only fans shirt is wacky AF I wonder if he is making an account with fabia.

Fabia interrupting Diegos interview and telling them they need to speak to him instead was ridiculous. Diego hasnt had the fire ever since the loss to BJ.
You must log in or register to reply here.
Share:
Reddit WhatsApp Email Link
Top Bottom