Hang on Sloopy – The McCoys

Saturday song of the day: Today’s song was a minor R&B hit, then retitled and became a huge rock hit, and finally became the official rock song of the state of Ohio.

In 1964, two songwriters named Wes Farrell and Bert Berns (who was using the pseudonym Bert Russell at the time) wrote a song based on the nickname of piano player and singer Dorothy Sloop. Between them, Farrell and Berns wrote a number of hits in the 1960s and 1970s, including Twist and Shout. The song they wrote in this case was My Girl Sloopy, which was recorded by the Los Angeles-based group The Vibrations. The record was a minor hit, reaching #10 on the R&B chart.

The following year, a New York rock group called The Strangeloves started playing the song live and intended to record it. However, English band The Dave Clark Five was touring with the Strangeloves and indicated that they were going to record it as soon as they returned to England. The Strangeloves did not want to record the song right away since their hit I Want Candy was still on the charts, but they also didn’t want to be beaten to the punch by The Dave Clark Five. [I Want Candy was song of the day for September 29th, 2014 and can be found here: I Want Candy – The Strangeloves (plus Bow Wow Wow cover version) ] What they did was recruit a band called Rick and the Raiders who had opened for them in Dayton, Ohio to record the song instead. To avoid confusion with Paul Revere and the Raiders, the band was renamed The McCoys for the record.

Rick and the Raiders/The McCoys were basically a bunch of high school kids. They were led by 16-year-old singer and guitar player Rick Zehringer. He later changed his name to Rick Derringer and had a successful career as a solo artist, as a member of various bands, and as a producer.

Their version of My Girl Sloopy was retitled Hang on Sloopy and was recorded and released quickly in order to beat The Dave Clark Five. It was released in July 1965, entered the charts in August, and reached #1 on the Billboard Hot 100 on October 2nd, 1965.

The story of the song is strange enough already, but there is more. Not long after the record by The McCoys reached #1, the Ohio State Marching Band performed a bit of the song during a halftime show to pep things up a bit from the usual marching band numbers. It proved popular, so they added the song to their repertoire. Over the years it became a tradition, and in 1985 a resolution in the Ohio General Assembly named Hang On Sloopy as the official rock song for the state of Ohio. Over fifty years after the McCoys released their version, the OSU band still performs the song regularly.


Tomorrow: When my ears started ringin’ like a fire alarm

Think I posted this before here, I love this track.

Shout by tears for fears.

Weird, just talking about it yesterday

Sunday song of the day: Today’s song was the lone solo hit for a musician best known as a band member, studio musician, and producer. 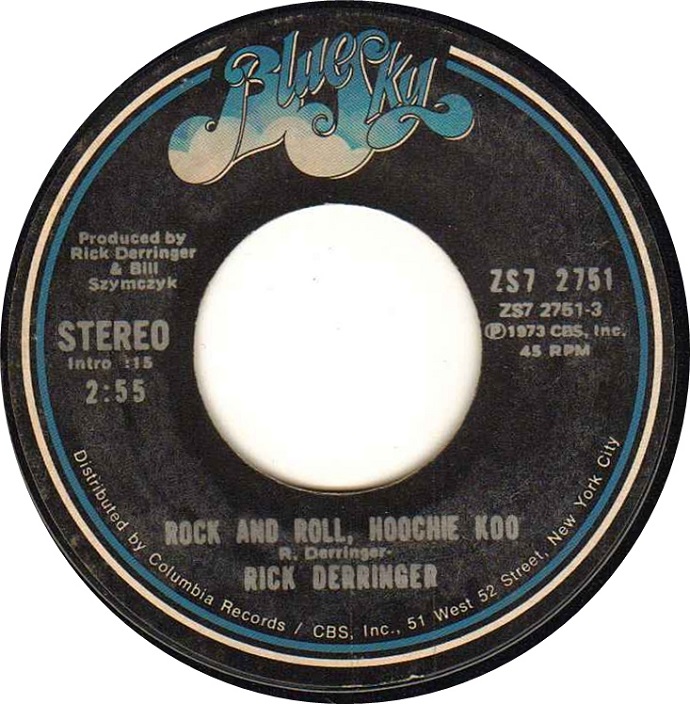 Yesterday’s song was Hang on Sloopy by The McCoys, a band led by 16-year-old guitarist Rick Zehringer. He later began using the stage name Rick Derringer and after the McCoy’s folded found work in other bands and as a session player. Most notably, he played guitar in The Edgar Winter Band, and later in Johnny Winter’s band.

While working with Johnny Winter, Derringer wrote Rock and Roll, Hoochie Koo, a song about teenagers just enjoying life and music. Winter recorded the song and released it on his 1970 album Johnny Winter And, for which Derringer shared producer credit with Winter. Rock and Roll, Hoochie Koo was released as a single from the album but failed to chart.

A few years later, Derringer made his solo debut album, All American Boy. Derringer recorded his own version of Rock and Roll, Hoochie Koo for the 1973 album, and it was released as the first single from the album. It was a moderate hit, reaching #23 on the Billboard Hot 100, but over the years has been more popular on classic rock radio than its initial chart position would indicate.

Derringer never again had a Top 40 record as a solo performer, but has been extremely successful as a guitar player, songwriter, and producer. He has played guitar for Edgar and Johnny Winter, Steely Dan, Barbra Streisand, and many others. If you have heard Weird Al Yankovic’s song Eat It, which included the over-the-top guitar solo, that was Rick Derringer. In fact, Derringer was the producer on several of Weird Al’s records. His other credits are too numerous to mention.


Tomorrow: I come up hard, baby

Monday song of the day: Today’s song is the theme for a 1972 Blaxploitation film.

As I’ve mentioned in past Song of the Day entries, Blaxploitation films were very popular for a while in the 1970s. Many of them may or may not have been good as films, but they often had strong soundtracks. Some, like Shaft, are considered fine examples of the film genre and also have exceptional music. In the past, I’ve featured good songs from fairly forgettable films like Across 110th Street, [ Across 110th Street – Bobby Womack ] and classic songs from classic films, like Freddie’s Dead from Superfly. [ Freddie's Dead (Theme from "Superfly") – Curtis Mayfield ]. Today’s song is an example of the former: a great song from an average movie.

In 1972, a film called Trouble Man hit the theaters. It was a story of a Los Angeles private detective known as “Mr T.” Not to be confused with the later 1980s icon Mr. T. from the A-Team TV series, in this case the T stood for Trouble. Played by Robert Hooks, T was a not very subtle Los Angeles imitation of New Yorker John Shaft. In fact, the writer and producer for Trouble Man had co-written Shaft the previous year.

While the film was merely OK, the theme song was magnificent. Marvin Gaye wrote and performed the music for the film. He released an entire soundtrack album, but the centerpiece was the title track, Trouble Man. It was released as a single and peaked at #7 on the Billboard Hot 100 chart. Later, with the film mostly forgotten, it remained a staple of Gaye’s live concerts.


Tomorrow: Never been a sinner, I never sinned

Suicidalforlife said:
Think I posted this before here, I love this track.

Christ. Haven't thought about them in years. Going back to my LSD years there, bud.

@YourDaddyDevilAndLord
That thread is genius but I don't want to waffle it up.

First time I saw Strapping Young Lad his first words that he yelled were "stick this in your fucking c*nt". It was a brilliant set.

His work with Vai was brilliant too.

your songs are so choice

Spirit in the Sky – Norman Greenbaum

Tuesday song of the day: Today’s song was inspired by a postcard.

In 1969, singer/guitarist Norman Greenbaum was working on a solo project. Previously he had been in a band called Dr. West’s Medicine Show and Junk Band which had a minor hit that placed at #52 on the Billboard Hot 100, entitled The Eggplant That Ate Chicago. No, I am not making that up.

The initial inspiration for the song came from a postcard that he happened to see. He explained it to Rolling Stone magazine in a January 2020 interview on the occasion of the song’s 50th anniversary, “I had come across a greeting card that said ‘Spirit in the Sky.’ And it was American Indians sitting in front of a tipi, with the fire going and being spiritual towards what they had deemed God, which was a spirit in the sky. I think it was the Hopi. So I went, ‘That’s kind of interesting.’ These two had nothing to do with each other. I just put it in the back of my head.”

Not long afterward, he was watching Porter Waggoner do a gospel song on TV, and that spurred him to take the “spirit in the sky” idea and write a song. He claims that he wrote the lyrics in just 15 minutes, although the musical arrangement took longer.

Greenbaum is Jewish, but for Spirit in the Sky, he invoked Christianity, with the line “I got a friend in Jesus.” Partly, this was because it just worked better in the context of the song, and partly it was because Greenbaum figured it would appeal to a larger audience.

Spirit in the Sky was released in the UK in December 1969, and in the United States in January 1970. It was a big hit, selling over two million copies and placing at #3 on the Billboard Hot 100.

In 1986, it was covered by the English glam rock band Doctor and the Medics. Their version went to #1 in the UK, but only placed at #69 on the Hot 100 in the United States. In my opinion, Doctor and the Medics really added nothing to Spirit in the Sky other than looking weird for the music video, and the Norman Greenbaum original is very much superior.

silentsinger said:
Christ. Haven't thought about them in years. Going back to my LSD years there, bud.

@YourDaddyDevilAndLord
That thread is genius but I don't want to waffle it up.

First time I saw Strapping Young Lad his first words that he yelled were "stick this in your fucking c*nt". It was a brilliant set.

His work with Vai was brilliant too.
Click to expand...

Nothing gets a trip goin like a few Osric tracks